skip to main | skip to sidebar

This exhibition, run in conjunction with the folks from The Bullpen and featuring several pieces of my work will run for at month at STEAM in Swindon, before moving on to Didcott (details to follow) 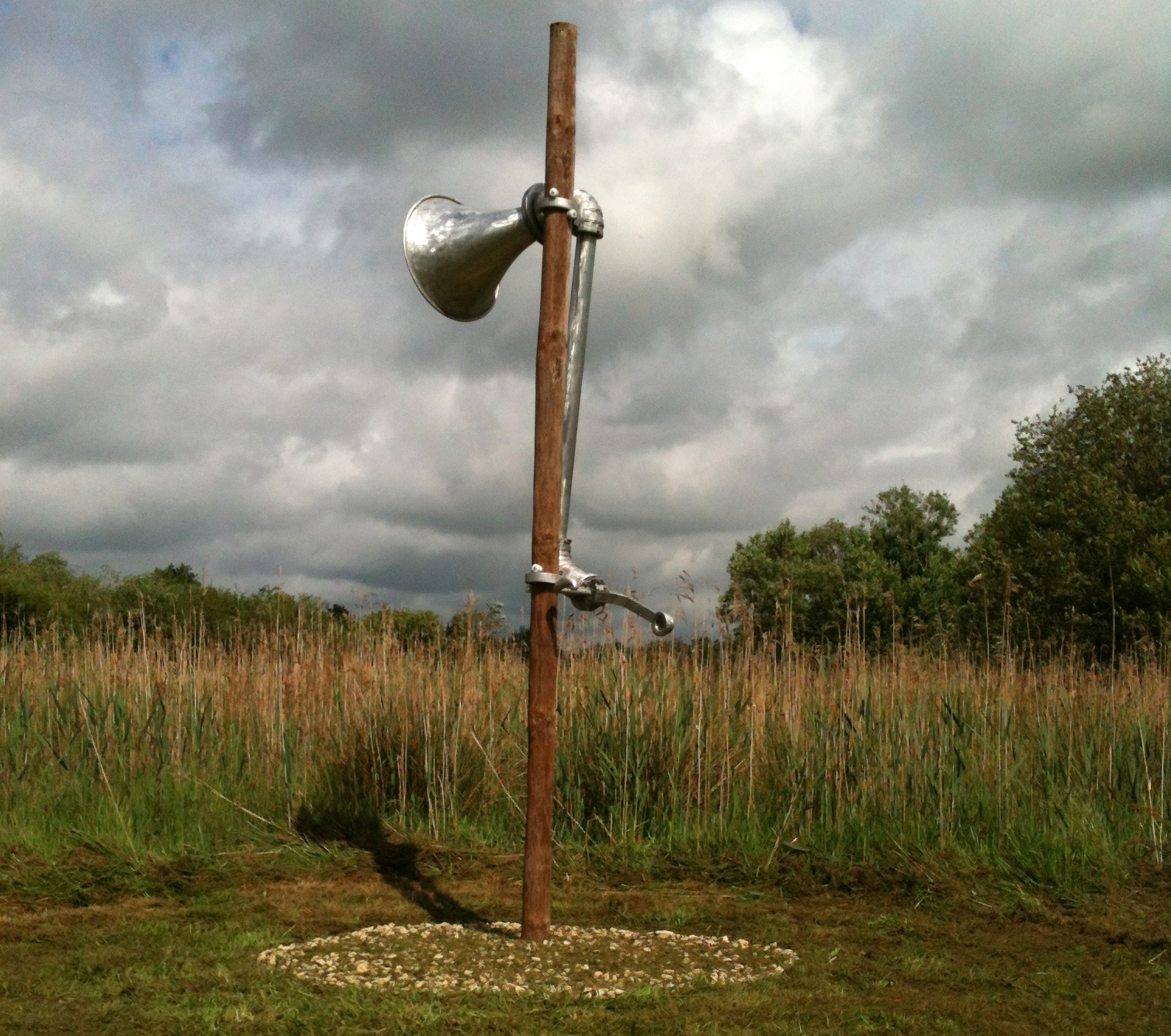 'The Listening Horn' will be officially unveiled in Lancashire at the Wildlife and Wetland Trusts Martin Mere Reserve on the 16th of July.
Posted by Black & White Casting at 14:49

Following on from the success of Within Without You, Brian Gibson is curating another exhibition at The Old Pet Shop Gallery in Bath. I'm happy to announce that it will also be featuring a selection of some of my work.

Come along and have a look at a wide selection of work. Visit http://www.bathpopupgallery.co.uk/ for more information, or like via Facebook - https://www.facebook.com/BathPopUpGallery

Within Without You - Bath

“Turning an empty space into the most dynamic art show in town”
25th May – 10th June 10am-6pm
Don’t miss this opportunity to visit the 1st WWY show
New Art by 16 Artists from Russia / Germany/ Sweden/Spain and Uk
Curated by Brian Robert Gibson
http://withinwithoutyou.info/

I am one of the featured artists - see www.facebook.com/groups/withinwithoutyou/  for more information.

[Update]
... This was a cracking exhibition, congratulations to Brian. In fact it was so successful, there's talk of a new exhibition coming up soon!
Posted by Black & White Casting at 19:10

The Roly Poly piece sold at auction yesterday - proceeds were shared between AMSO and Allison Baker to help further her degree.

It was nice to hear that the buyer is a curator at the museum. Result!
Posted by Black & White Casting at 18:17

A collaborative piece I worked on with Allsion Baker down at Sculpture Trails is up for sale at the following even. Wish her luck in getting a good a good price (or even better, if you're in that neck of the woods, go a place a bid!

Throughout the day, AMSO will host their first Annual Silent Student Art Auction on the second floor of the Art Museum’s atrium. Half of the proceeds from each sale will go to the artists and the other half to AMSO for the continuation of programs that promote student awareness of the Art Museum, its collection, and outreach. The students’ artwork will be on display and silent bids will be taken from 10 a.m. until 6:40 p.m. , when the bids will be opened. Mark your calendars and make plans to support student artists and AMSO!"The Art Museum Student Organization (AMSO) of Indiana University is dedicated to promoting the Indiana University Art Museum by bridging the gap between students and the museum, heightening art awareness on campus and creating a strong arts community around the museum. The Art Museum Student Organization aims to encourage and create opportunities for student involvement with the museum, along with gaining valuable skills and connections with those in the art world."
Posted by Black & White Casting at 00:23

A selection of work on display at The Castle Pub, Old Town, Swindon

As the title says, an array of my work is on display up at The Castle for the next few months. Again, its something we complain about in Swindon - the lack of affordable (or for that matter, ANY) gallery space. However, local business people help to fill the cultural chasm: The Beehive and The Castle have work by local artists on display, Belgravia Lettings latterly used to hold regular exhibitions - and I believe two of the new cafes on Victoria Hill also encourage local artists to display their work. The results advantage all parties: the owners get free decoration - and increased footfall as a result of friends, family and admirers coming to see the work. The artist gets public exposure. Its a win win.

What a shame that the council doesn't see the need to provide this space. Despite its often touted appreciation of the arts, we never got the gallery which was originally promised as part of the (now moribund) 'Swindon Regeneration'. We've also lost one of the few public galleries since the Art Centre was combined with the Old Town Library. That means no available wall space for hanging/displaying work and it also means the loss of one of the few affordable studios.

Its a little known fact that Swindon also holds one of the largest and most important collections of modern art outside of London. Unfortunately, there's a good reason that this fact remains hidden: the town museum is simply way too small to display more than a few % of the collection. Add to this, the museum is miles from the train station and opens infrequently - the rather arbitrary Wednesday to Saturday, 10.00am to 5.00pm.

Its a shame that the council seems fit to splurge literally hundreds of thousands of pounds on failed projects like Wi-Fi, or big one-off ego fests like the Radio One Big Weekend, but fails to understand that a well designed art museum could be a cultural draw AND net long-term money earner for the borough.

In the meantime, local artists have to continually struggle against the notion that Swindon is irredeemably culture-less. Its a struggle against a failed brand in many respects - and the expectations that any member of the public might have when you mention Swindon and art in the same breath.
Posted by Black & White Casting at 15:09

Yes - very exciting! IKB#2 will be on display at the Oxford Pitt River from the 22nd of November to the end of January.

I'll be off to get some better photos over the Christmas break when my muse joins me - but heres a few priview shots courtesy of Helen (to whom I owe a big thanks!) 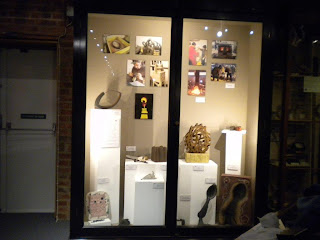 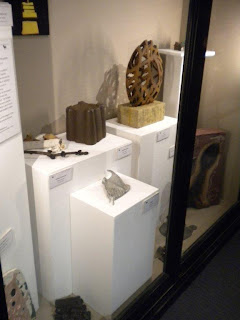 The Columbus/Indiana Cast Iron Invitational 2011 (aka 'The Paradise Pour)

I've just been informed that I will be having the pleasure of participating in the following exciting event: http://www.artsincolumbus.org/caac/index.cfm/calendar/paradise-iron-pour-columbus-indiana/
Posted by Black & White Casting at 04:26

Toby's work will be on display at The Beehive for the whole of September
http://www.bee-hive.co.uk/home.mhtml
Posted by Black & White Casting at 04:22

A Month at The Beehive...

March is metal month at The Beehive. I'll be exhibiting a selection of smaller wall mounted stuff as artist in residence at the Beehive - the town's cultural hub!

One week to go at Artsite and lots of fun, a few sales and lots of ideas. Go have a look at the main blog for the latest info. I thought I'd post a couple of images to show you what an excellent space the Artsite Gallery provides (this one courtesy of Gordon Dickinson - as inspiring and fun as ever!):

A big thanks to Stany too for the images taken on the day of the private view. I will post some here and some in the Finished Works section: 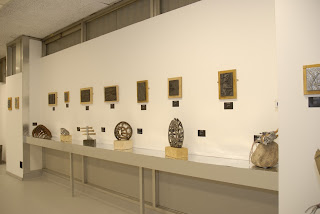 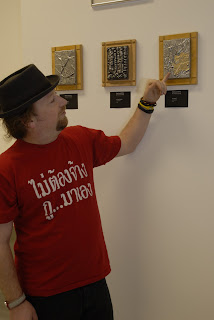 Old Town based artist and sculptor Toby Robson will be showing his latest exhibition 'FeAl' at The Post Modern Gallery from Tuesday, February 1st to Friday February 18th 2011

Toby specialises in metal casting in aluminium and iron and has a small workshop and foundry near Devizes.

"The exhibition itself is a follow on to some work I exhibited at Belgravia Lettings last year. Some of it reflects my experiences over a very difficult couple of years, others pieces reflect my interest in organic forms, and throughout I've played with different casting techniques to create a range of effects and finishes. The name 'FeAl' is both a pun on process of creation and of the chemical symbols for my two favourite mediums."

The exhibition serves as preparation for this summer, where Toby's been given the chance in a lifetime lifetime offer to cast and install a large scale iron sculpture at the internationally famous Sculpture Trails outdoor museum in Solsbury, Indiana.

The Post Modern Gallery will be open from 11.00 to 4.00pm weekdays and Saturdays (private views can be arranged outside these hours by appointment).
Posted by Black & White Casting at 17:27

A selection of work will be available to view at Artsite in February 2011 and at The Beehive in March 2011. Details to follow.
Posted by Black & White Casting at 15:25

Artsite (of which I'm a member) regularly hold exhibitions of work by local artists - well worth a visit. For the latest news, visit http://www.artsite.ltd.uk/
Posted by Black & White Casting at 14:36

We're also hoping to have a stand at the Swindon Big Arts Day on the 10th of July (again, details to follow)
Posted by Black & White Casting at 12:22

On view in the summer...

A selection of my work will be available for viewing over the summer months, courtesy of my friend Moon - Aka Paul Augustus Waters, at the Cotswold Water Park. http://www.cotswoldcountrypark.co.uk/pages/about.html
Posted by Black & White Casting at 01:19

We seem to have forgotten to mention that a selection of stuff was up on the walls of Swindon's finest alehouse - the incomparibe BeeHive - in February. Nowt were sold, but several interesting conversations were had and local artists Gordon Dickinson and Moon (aka Paul Augustus Waters) came to have a look, said many kind things and gave some good pointers on mountings, bases and plinths - thanks chaps! Incidentally, here are some links to their websites: Gordon and Moon

(Thanks to John and to Rocky for helping me get stuff on and off of the walls!)
Posted by Black & White Casting at 16:44

Toby and I had a small display of our works at the TOES exhibition in Oxford (Templar's Square OX4 3XH), which ran in October and November 2009 (if my memory serves me correctly).  Thanks to Kavitha Paramasivan for organising the event and inviting us to participate.  Note: That's me in the photo that is (John). 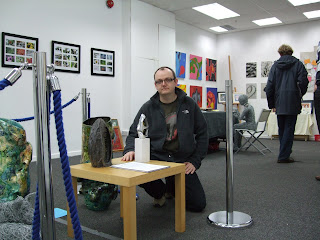 A selection of Toby's works are going live this afternoon at the Beehive Pub (SN1 3JS). Pictures to follow.
Posted by Black & White Casting at 14:46 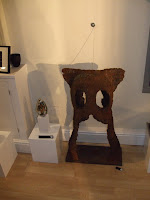 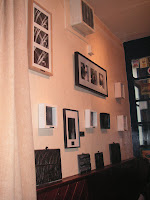 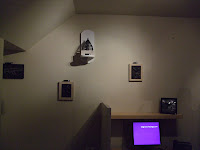 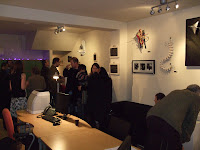 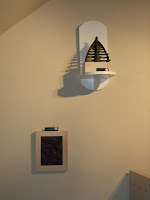 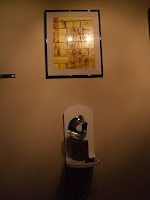 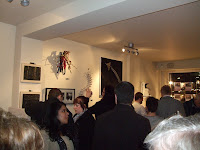